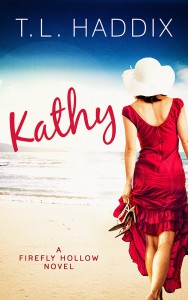 I’ve been trying to write this post for days, and Life as it often does keeps interfering. Suffice it to say living in the middle of nowhere is good in some ways until you have an emergency situation with a cat that involves needing specialized care. Then life gets a little crazy. With that in mind, I apologize for not “writing to you” sooner.

So… Kathy. Wow. Where to start? It comes out tomorrow, the 19th. I’m full of nervous butterflies as I wait to see what you all think. I hope you like it as much as I do. I’m very proud of this one in a personal way, as it’s more of an intimate book in some ways. The other books have been fun to write. Kathy was necessary.

Kathy is the twentieth book I’ve written, the tenth book in the Firefly Hollow series. It takes place chronologically after Firefly Hollow, before Butterfly Lane. It’s set mostly in 1963-64, and is set almost wholly in Savannah, Georgia.

Most of you are familiar with the name Kathy, and you’ll instantly know who and what this book is about—Sarah Campbell’s older sister, Kathleen, who suffered a terribly violent assault in Firefly Hollow. She’s the sister who (still) lives in Georgia who’s struggled throughout the series (as we’ve seen through other characters’ eyes) with depression and mental illness because of the tragedy of losing everything in such a violent manner. So right out of the gate, Kathy’s story had to be different.

I’ve dealt with some heavy topics in other books but nothing like her story on this scale or level of intimacy. Not really, not from the main character’s point of view. Plus, as much as it was important to show Kathy’s relationship with Charles Kelly, the main focus of the book is the rebuilding of Kathy’s life from the inside out. And it isn’t an easy job for her. As a matter of fact, when we meet her? She’s on the verge of killing herself to get away from the pain.

The inspiration for Kathy came to me in the middle of writing Noah and Sophie’s story, Stardust Valley. I was standing in the kitchen mixing up coleslaw, of all things, and it literally hit me like a bolt out of the blue. Someone had asked me about Kathy a few weeks earlier, whether she was ever going to have her story told or not, and at the time, I’d said I didn’t know. She definitely had a story, but I didn’t know what it was or where it started or how it should be told. I guess I’d been thinking about it subconsciously or something in the weeks after the question was asked. And standing at the counter that day, I just knew.

The only way to show people the truth about Kathy, to dispel the image that she had for most of Firefly Hollow, which was largely due to the outside influence of her rat-bastard husband, was to throw open the door and literally put her on the edge of the world. Her pain and her hurt and the damage that was done was too grievous for anything else. Certainly, she does reach a point at the end of the book that she’s able to deal with the truth, but in the beginning? She most certainly is struggling. And that was the truth of Kathy we had to see before we could see her rebuild her very soul from the inside out.

It’s been an interesting proposition to write this story now, after we’ve already seen so much of the future from the Campbell clan in their subsequent books. Truly, changing gears so that I could go back to when these events were happening was a bit of a challenge. So much hadn’t yet happened—children hadn’t been born, much less the third generation of Campbells we’ve read about in recent books. Ideally, I would have written Kathy directly after completing Firefly Hollow. But at that point, Firefly Hollow was a one-off, a standalone book. And if we’re being perfectly honest, I needed a few more books under my belt before I had the writing chops to pull Kathy off. I can only hope I have them now.

Going back in time to see Sarah and Owen as a young married couple, to see Eliza again—oh, you can be sure that ripped out my heart. To see John as a toddler, Ben and Emma as babies, Jack and Gilly just starting out and starting their family? It was surreal in a way. And yes, I did place a few Easter Eggs throughout the book for you. Let me know if you find them! 😉

Oddly enough, writing young Owen and Sarah was a bit of a challenge. I’m so used to who they are now, well into the future when they’re enjoying harassing all those grandkids, that it took me a bit of work to get back into the shoes of who they were then. It was a fun trip back in time, but I’ll admit it was a bit of a mental journey.

In any event, I hope you enjoy reading Kathy’s story as much as I enjoyed writing it. To be able to see her through the hard times, to see that there was still hope for her at the end, and especially knowing what comes for her in the future after the book closes, it was a story that I think very much needed to be told. I hope you agree.

Where to get Kathy: