Is it Just Fiction – G.M. Barlean 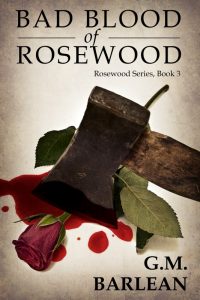 In this digital age, friendships are started and grow over great distances like never before. I have a lot of friends who are authors, but I’ve never met them – we live too far apart, and I don’t travel well. One of the few authors I’ve actually met in person is Gina, also known as G.M. Barlean. She and Victorine Lieske were at a writer’s workshop a few years back when we lived near Louisville, Kentucky, and we had the pleasure of spending a couple of hours with them. I hope you’ll enjoy reading her responses as much as I did, and I also hope you’ll pick up her books and give them a try. I think you’ll like them. Without further adieu… Is it Just Fiction, G.M. Barlean.

Are the characters’ an extension of you, the author? If yes, in what way?

Since she has a new release, I asked G.M. who her favorite character was from that book. Here’s what she said.

My favorite character in the Bad Blood book is Doug. He’s just a big, unassuming guy who had a tough childhood. He could have become an angry man and was when he was younger, but now in his sixties, he’s just glad for the simple things in life. He says the things we all think but don’t say out loud. He’s an old hippy-type dude. Loyal as a good dog. He has no agenda whatsoever. Out of the entire series, I love the characters of Debbie and Doug Jr. the most.

Gina M. Barlean is a Nebraska author who writes mystery and suspense with a Midwestern voice, and characters who could be anyone the reader might know—a co-worker, an aunt, a neighbor, or even themselves. She has written nine books. One book is a collection of non-fiction essays, one is a self-help book about networking, and the other six are suspense fiction ranging from cozy mystery to dark, almost horror, to main-stream fiction with historical elements. Her ninth book (Bad Blood, available now) will complete the cozy mystery trilogy of the Rosewood series.

Small rural towns and Midwestern perspectives are something she knows well. It takes a curious mind and good imagination to stay entertained in a one-stop-light town. However, don’t be fooled. Interesting things can happen anywhere, especially in G.M. Barlean’s books. Be assured, all is good in the simple lives of her and her family… but in her books? Not so much. Conflict is alive and well in the novels she writes.

G.M. Barlean has been a professional photographer, managed her small town’s Opera House, and worked with entrepreneurs as the director of her town’s Chamber of Commerce. She’s gone to culinary school, where she discovered opening a restaurant was not her life dream after all. Her husband tolerates all of her changing moods and adventures like the good soul he is.