Is It Just Fiction – Sean Sweeney

Sorry for the delay in getting this posted. Yep, life again! Anyhoo, I thought Sean had some really cool answers, and I hope you’ll find them interesting, too. Happy reading!

Are the characters extension of you, the author? If yes, in what way? 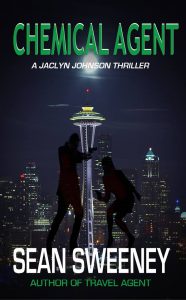 Aren’t all characters that way? There are some characters, the protagonists, who are a little bit of me—the hero, or the hero I dream myself to be, I should say—and then there are some characters, the antagonists, that are the scourge of humanity, pulled from the headlines of the day. You know how there are people you see in the news who pull off such abnormalities against society and you just want to reach through your televisions and strangle them? Yeah, those are my antagonists.

Of course, I also write about a sexy blonde CIA counterterrorism agent. And she has an ass that… well, maybe I should stop talking and let your readers find out for themselves.

A lot of characters—and not just characters; entire storylines—come to me in dreams. For instance, Jaclyn Johnson, the aforementioned sexy blonde CIA counterterrorism agent, came to me in a dream. Woke me out of a deep sleep at about 3:30 in the morning one day in November 2009, and I haven’t had her out of my mind since.

And then there are some that take shape as you’re sitting at your keyboard. Your mileage may vary, of course.

No, they aren’t, but you have to sometimes think they are; you have to mold them just in such a way that they resemble real people, because real people don’t do certain things.

In an itty-bitty flash drive that I try to take with me everywhere I go.

Eh, if I had to guess, they’re having sex, going grocery shopping, and evacuating their waste (which for some reason, I never have them do that).

Honestly, I don’t think my protagonists do anything like that; at least I don’t think they do. They are very good characters who always try to do what’s right (but they lean left, politically). The antagonists, though…. they do everything that’s wrong.

Oh, by all means, I let them take the wheel! I’ve always said your characters know the story better than you ever will. Case in point: Back in November 2009, I’m writing my first NaNo project, which became Zombie Showdown. And there’s one night where I’m working on the story—I think it was a Friday night, the first Friday night with no games to cover—and I’m perplexed; I’m thinking about what to do, and all of a sudden, the (spoiler) come out of hiding to surprise the protagonist. That led to a nice boost in the word count, and really helped out with the denouement of the story.

Remember that you as the author are only the conduit to the characters. The characters should be sitting on your shoulder like they would as if sitting on a dock, letting their toes drag against the water. And they’re whispering in your ear to do this or to do that.

And you should listen to your characters.

I think the last question answers that one, but I have to say it’s a little bit of both. I prefer to know where my story is going before I sit down to write; I’m totally a plotter. But like I said, when the characters want to do something that goes against what I’ve already planned, I let them go for a spin for a while before I tell them it’s time to get back on track.

Sean Sweeney is an every-genre author. Most of his books are fast-paced thrillers, but he has dabbled in fantasy, mystery, romance, etc. You can connect with him at his website, on Facebook, or on Twitter @SMSweeneyAuthor. His books are available on Amazon, BN, and iTunes.